Most commonly they are used in growing children for class III orthopedics.
Read More

The Bollard miniplate anchor consists of 3 parts: a 2 holes (for the mandible) or 3 holes (for the maxilla) titanium miniplate, a neck (round connecting bar) and a cylindrical fixation unit with a tube and hook (‘Bollard with hook’) or with a blocking screw (‘Bollard’). Through the holes in the miniplate the bone anchor is fixed by monocortical titanium screws.

Most commonly they are used in growing children for class III orthopedics.  In this case 4 miniplates are inserted: 2 in the maxilla close to the upper left and right infrazygomtic crest and 2 in the mandible at both sides between the lateral incisor and canine.

Titel accordeon
Inhoud accordeon
What is the best surgical protocol?

A posterior based mucoperiosteal flap is made for bone exposure.
The Bollard miniplate has an angulation at the connection between the plate and round bar, opposite to the curvature of the bone surface. The Bollard miniplate is positioned without prebending just in front and parallel with the infrazygomatic crest.    The 90° angle of the round bar should be at the level of the horizontal incision, 2mm into attached gingiva. 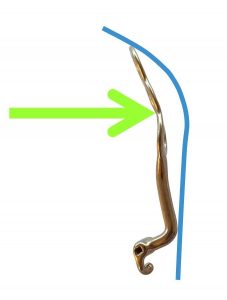 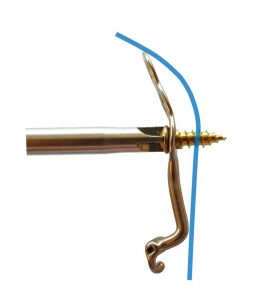 While the miniplate is hold in place by a needle holder through the middle hole, a pressure by finger or metal instrument is applied at the level of the lower hole, to push and bend the plate slightly against the bone surface. The lower screw is inserted. 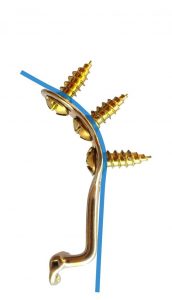 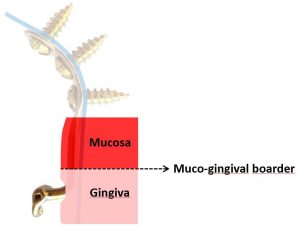 During fixation of the screw the needle holder is removed, and the lower part of the miniplate will be further pressed and adapted to the bone surface.  The screw is not completely secured to allow some slight rotation before inserting the second screw. The middle screw is inserted.  Again, the middle part of the plate will be further adapted to the curvature of the bone by tightening the screw.  Finally, the upper screw is inserted and all screws are secured well.

By this procedure you will have contact between the 90° angle of the round bar and the alveolar bone, easy closure of the mucoperiosteal flap, and perforation at the level of the attached gingiva, with no risk of dehiscence into the mucosa.

The same procedure is followed for the lower jaw.  An inverted L or hockey stick incision is made with the horizontal extension 2mm into the attached gingiva.

Without prebending the plate is positioned with its long axis parallel with, and in between the roots of the lower canine and lateral incisor.

By gentle pressure and by securing both screws, the miniplate will automatically be adapted to the curved bone surface, with a tight contact between the 90° angle of the round bar and the alveolar bone facing attached gingiva 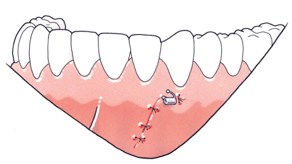 Why should I NEVER PREBEND the anchor?

If you remove the bend, with opposite angulation to the curvature of the bone surface, by pre-bending the lower part of the miniplate before fixing it to the bone, after inserting  the 3 screws, the 90° angle of the round bar will not touch the alveolar bone.  No contact with the alveolar bone will result in a perforation of the mobile mucosa above the muco-gingival border in the maxilla and below the muco-gingival border in the mandible, with high risk of local infection and loosening of the screws.  This is the main cause for loss of stability after surgery.

What type of Bollard miniplate should I use?

For the maxilla 3 different sizes are available: the standard length of 21mm, a pediatric size of 18mm and the Y-shape with a total length of 19mm.

Although the Pediatric model is the shortest, it is recommended to place the standard length (BH-UL(R)-21) or Y-shape ((BH-UL(R)-19-Y), also in children.

The advantage of the Y-shape is the insertion of the lower screw on the base of the crest, where the cortical bone is thicker than in front of the crest.  The round bar is longer and the lower screw is further away from the roots of the upper molar compared with the Pediatric model.  Also the middle and upper screws are closer to the crest and all 3 screws have a slightly different angulation.  This results in better stability. 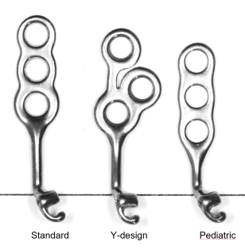 Which screws should I use?

It is recommended to use 5 to 7mm self drilling titanium screws with a diameter of 2mm.

What are the best locations to fix the plates?

In the maxilla the best location to fix the straight Bollard miniplate (BH-UL(R)-21 or BH-UL(R)-18-PED) is just in front of and with its long axis parallel with the infrazygomatic crest.

The Y shaped Bollard miniplate (BH-UL(R)-19-Y) is inserted with the lower screw on the base of the infrazygomatic crest, the 2 upper screws on each side of the crest and the long axis of the round bar perpendicular with the occlusal plane.

In the mandible the standard straight model (BH-LL(R)-16) is inserted between the lateral incisor and the canine rather than between the canine and first premolar, where the height of attached gingiva is reduced, and a labial frenum may be more or less present.

Do I have to wait after the eruption of the lower canines?

Most commonly, the lower Bollard miniplates are inserted after full eruption of the lower canines.

To avoid interference between the osteosynthesis screws and the unerupted germ of the lower canine in a case with delayed eruption (the patient may become too old for orthopedic treatment), exceptionally a Y-shaped upper Bollard miniplate from the same side can be placed in the mandible.  The plate is fixed only with the lower and middle screw and no screw is inserted through the upper hole (facing the germ).

Which type of aneasthesia should I use?

The devices are placed under local anaesthesia. However, if problems of compliance are expected, it is recommended to place the devices under sedation with NO2 or IV sedation. To reduce the risk for infections, the insertion of the miniplates should not be combined with extractions of teeth in the proximity of miniplate insertion.

Prescription of antibiotics is not mandatory but the surgeon decides if antibiotics are needed, based on his clinical experience and the individual evaluation of each patient.

Removal of the miniplates: when and how?

The Bollard miniplates are removed on demand of the treating orthodontist, when there is no tendency for relapse of the skeletal class III after debonding the fixed appliance.

The Bollard miniplates are commonly removed under local anaesthesia.  Through a small vertical incision on top of the screws the screws are removed first.  Sometimes there may be some subperiosteal bone overgrowth that may complicate the engagement of the screw driver and may necessitate the removal of the overlaying bone first.  Exceptionally there is so much bone apposition on the plates that it is recommended to only cut and remove the round connecting bar with the intra-oral fixation unit.

What should I do when a miniplate gets mobile?

Mobility can be caused by bad oral hygiene and local infection, jiggling forces, or poor bone quality, especially in the upper jaw where the cortical bone can be very thin in growing patients.  If the mobility persists, the bone anchor should be removed under local anaesthesia and after thorough rinsing the surgical field should be closed.

Two to three months later the bone will be healed and of better quality than at the first surgery, so that the miniplate can be replaced, with reduced risk of loosening.

Do you have another question?